TIMES REMEMBERED: A History of East Lane by  Barry Serjent

The Wembley of seventy years ago, when the East Lane Dramatic Society, as it was then, was formed, was very different from the Wembley of today. The last trams were still rumbling down the Harrow Road to The Swan at Sudbury, and Wembley was just about to become a Borough.

Our Club had its beginnings in 1936 at the East Lane Senior School, now Wembley High School, where pupils presented Ashley Dukes’s comedy THE DUMB WIFE OF CHEAPSIDE. This was so successful that a drama group was formed under the guidance of the Music and English masters, and the first meeting of the East Lane Dramatic Society took place on 28th October 1936. The minute book lists sixteen “Members (Male)” and fourteen “Members (Female)” and rehearsal fees were set at 6d (2 1/2p) a week. Incidentally, the minute secretary recorded some personal criticism of the members, noting that “Denton must learn his part” and that “Smith must announce better”. The latter would have been Donald Smith who, with John Hobbs, was one of the most active and long-standing members of East Lane.

The first production was HOTEL SPLENDID or A RIVIERA EVENING, a selection of songs and sketches ending with a one-act play

A COLLECTION WILL BE MADE. Our photograph shows not only members of the Society but also The Melodians, a band closely associated with East Lane. They played for some of the productions and, in return, some of the Society’s members would put on a cabaret at some of their dances.

The next production, CHRISTMAS HORS D’OEUVRE was an evening of one-act plays presented at the school in December 1937,

by which time the Society had held its first General meeting and had approved a Constitution. Plans were made for another evening

of one-act plays in 1938/39, but following a disagreement with the school, the Society became independent, and the next production was THE APRIL REVUE, staged at Brotherhood Hall, which was just off the Wembley High road near the old Post Office.

That was in 1940; one further production followed in February 1941, three of the LITTLE PLAYS OF ST. FRANCIS by Laurence Housman but by this time air raids, the blackout and rationing had become part of everyday life; several members were already in the forces, and, with others registered for call-up, it was inevitable that the Society would have to bring down the curtain on its activities. That might have been the end of The East Lane Dramatic Society, had not one of the members, Frank Armstrong, who was in a reserved occupation, started a newsletter, which kept everyone in touch for the next four years.

In August 1945 a meeting was held to see if it was possible to re-start the Society, but it wasn’t until the following year when the first post-war, and, indeed, the first full-length play, TO HAVE AND TO HOLD, by Lionel Brown, was presented at Preston Manor School on 21st December. Tickets were 2/6d and 1/6d and programmes were 3d. The production was a great success, and the treasurer, Ken Hall, reported that the Society had made a profit of £12.12s.11d, after a rebate of £10.10s.5d in respect of entertainment tax had been included! CHARITY BEGINS by Ireland Woods, and the Victorian thriller PINK STRING AND SEALING WAX by Roland Pertwee were presented in 1947, and put East Lane firmly back on the local dramatic map.

A revised constitution, largely the work of Donald Smith and John Hobbs, was adopted, and stage equipment was being purchased. Socially, the Society was busy with Sunday evening play readings, theatre outings and an acting course given by Frank Newman, one of the RADA tutors and a professional adjudicator for the British Drama League.

In 1948, the Wembley Drama Guild was formed to co-ordinate the activities of local dramatic societies and also to present an annual non-competitive drama festival. East Lane was one of the founder members, John Hobbs was Vice Chairman and John Turnell was the Treasurer. Our entry in the Guild’s first festival was ONE EVENING AT NERO’S a comedy by A.J.Talbot which received high praise from the adjudicator, not least for the set and costume designs by Jack Moran.

New ground was broken in 1949 with the Society’s first pantomime, DICK WHITTINGTON, written and produced by Kathleen Tasker who also played the title role, and the year ended with a performance of Kenneth Horne’s popular comedy FOOLS RUSH IN. 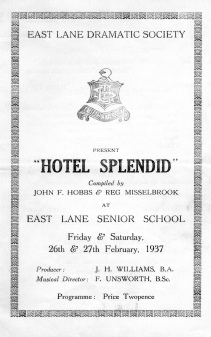